Words that show up in my mind when I recall Nongriat.

The rain, though predictable, unexpectedly began as we start the descent to the village of Nongriat, forcing to some breaks for tea and rest in modest bamboo huts. But what was coming to be an inconvenience proved to be a blessing, with the vegetation gaining a glow that gives greater vividness and contrast to the green nuances that fill entirely the horizon.

As the sound of drops of rain goes away, turn the shy sounds of the jungle, with an invisible orchestra formed by frogs and insects. Mosses and lichens show with all its power, absorbing water drops that slowly give off the bamboo leaves, which seem to bend under the weight of water.

Despite having lost the title of rainiest place in the world, resulting from the persistent deforestation, both to feed the timber industry or as fuel for the local population, Nongriat and the surrounding region of Mawsynram and Cherrapunjee in East Khasi Hills, continue to show a high rainfall. Even out of the monsoon (July and August) heavy rains are frequent, which during the so-called dry season only lasts a few minutes. From this semi-tropical climate, resulting in a lush and diverse vegetation: giant trees, palm trees, bamboos, ferns and ficus, whose aerial roots are indispensable to the construction of footbridges, which make so many people come to Nongriat.

The night arrives early in the valley, with green slopes and be lost as the blue sky surrenders to the night, leaving the village in almost total darkness, interrupted here and there by the faint glow of electricity that reaches every home. It’s this darkness that makes me realize how far I’m from the so-called civilization and how comfortable can be this simple and modest lifestyle, where the contact with nature brings a deep calm and tranquility.

Enjoying the freshness brought by night, we are naturally invited to share the calm evening with the other guests, surrounded by the dark cloak of night. But an unexpected glow, with an unusual intensity, emerges from behind the mountains, drawing ever more clearly the top of the contours of the hilltop, in the opposite of the village. It is the show of moonrise, that here with the full moon night, offers a magical view that makes all people stare, creating a space of quietness in the cross talk of the guests.

Nongriat is one of the hundreds of villages that are located on the slopes of the East Kashi Hills, and due to the isolation remain the traditional way of life of Kashi tribe almost intact. A lifestyle based on collecting product directly in the forest and sold them in Sohra market, that attracts people from that region every Wednesday. The forest provides pepper, bay leaf, betel nut, cinnamon, lemon juice… pineapples grow spontaneously a little everywhere, jackfruit abounds in the tree trunks, and around the village there’s beehive whose honey is also a business that supports the local economy. Porters go up and down the slopes bringing forest products and return with food and other products necessary for the simple life of this population of 150 people, where apparently the majority are children.

It’s the laugh of children in their restless plays that fills the air of the village, where is strange the absence of birds, monkeys and other animals. Early morning, in upright school uniform, the children forward to the village primary school, while the older ones need to climb the slope to take classes in Tyrna and Sohra. Despite the isolation and rural environment of this region, which could lead to a lack of interest in school, education is taken very seriously, with virtually all children going to school and learn English, language that is spoken by the majority of the population, even in the most remote villages as Sohra.

The Christian church is also a strong presence here in Megahlaya, that due to the remote location, as well as Nagaland, remained impervious to Hinduism, but could not resist the Christianization in the nineteenth century, during the British presence in India, imposed by missionaries that found here a fertile ground between an animist population.

But Nongriat has more attractive than only the living root bridges, with several paths leaving from the village, some towards neighbouring village, who also hide other living bridges, others toward the waterfalls, being the Rainbow Waterfall the most popular destination. For those who want to bathe in the clear waters of this cascade, of an unusual blue, have to go down a steep path, but along the way, as well as in other parts of the rivers that surround Nongriat are several natural pools formed by granitic rocks along river bed, providing clear and calm waters for a refreshing bath, relieving the heaviness from warm and moist tropical air. During the monsoon is not allowed bathing in the river due to the force of the water.

Where to stay in Nongriat:

There are three homestays in Nongriat. The first is at the entrance of the village, after crossing one of the living root bridges, one in the center of Nongriat, and the last is located just after crossing the double deck bridge. The Serene Homestay is the most popular and which offers better conditions. There are double rooms and shared room, but all have shared toilet outside. Dinner is prepared for all guests and for everyone else that ordered, served in buffet style, with delicious vegetarian food made by the owner and his wife.

Bed: 200 rupees per person, regardless of double or shared room.

The owner Ryan is a good source of information about trails, pools and other villages and bridges in the valley, as also about the way of life and local culture. His environmental awareness and good English make Ryan the spokesman of Nongriat and neighbouring villages, who come together to prevent the government to open a road to the valley. This so-called “progress” would destabilize the socio-economic way of life and would have environmental consequences resulting from the increase in visitors.

Where to eat in Nongritat:

Any of homestays in Nongriat serves food as well as the huts near the two roots bridge existing in Nongriat. However, it is a very simple food, mainly rice and dal… and chicken.

The best option is the Serene Homestay, with vegetarian food. The breakfast with porridge, fruit and nuts are delicious. Dinner (130 rupees) is served in buffet style, both for homestay guests as for who order in advance, and it is a great opportunity to socialize with other travelers. 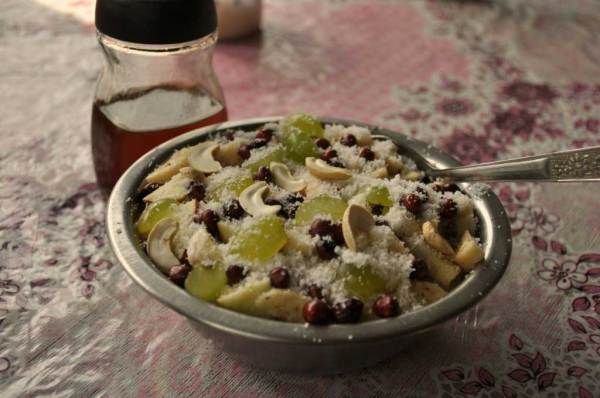 How to go from Sohra (Cherrapunjee) to Nongriat:

In front of the By the Way Lodge, there is a bus stand where around 9 am stops a bus bound for Tyrna, the nearest town of Nongriat with road access … from now on there are only paths down the mountain slopes to the villages located along the valley.

%d bloggers like this:
We use cookies to ensure that we give you the best experience on our website. If you continue to use this site we will assume that you are happy with it.Ok