Tinghir, also called Tinerhir, is a small city strategically located midway between Errachidia, midpoint on the way from Ouarzazate to the great Merzouga dune, nearby a fertile oasis feed by a river that mysteriously springs from the rocks that make up the Todra Gorge.

Probably the Todra Gorge is the main reason why people, usually independent travellers, stop at Tinghir, as this canyon show up as an impressive stone wall that is almost cut in vertical by an ancient river creating a corridor with about 10 meters wide, where the river shares the narrow gorge with the road.

The mountains are impressive, not just buy the high but also by the aridity and dryness of the place, where the clay color of the rocky lonely slopes contrast with the intense blue of the desert sky. The immobility of the landscape and the quietness of the place transmit a feeling of loneliness, apparently empty of wildlife, where humans appear to be the only creatures that dare to cross this gorge that separates the canyon from the oasis, like a gateway to another reality, separating the dry arid part of the canyon from the green and fertile valley of Tinghir.

But far more interesting than the Todra Gorge or the high canyon, is the oasis that fills up the last part of the canyon until Tinghir, nested between, creating a small paradise of green that contrast with the austerity of the rocky and brownish walls. This entire valley is cross by small streams, probably flooded during the rainy season, creating a fertile ground for agriculture.

Walking from Tinghir to the Todra Gorge on foot, avoiding the road that runs along this valley on the Westside, is the best way to get in touch with the local lifestyle, observing the population working in the fields, carry goods in donkeys, washing clothes or simply snacking on a work break, while kids play around.

Along the 12 kilometers that separate Tinghir from the Todra Gorge, you can observe the changing of the landscape, passing by many abandon settlements, where the mud buildings are slowly being eroding by the wind and by the scares rain, creating a bit ghostly feeling as we walk along this desert places.

The walk star along a dense olive grove where the path is not clear but where along the way you gonna fiend smiley help and you just need to ask in your best French “pour la gorge?!” and everyone can point the way. October is the season to pick olives, and all over the place families gathering under the trees, picking the black fruits from the ground, while on top, men hit the tree branches with sticks. It looks like an endless work but no one seems to care, not showing any rush.

As we keep on walking the olives are slowly been replaced by palm trees, which still show the characteristic clusters of dates, ready to being exposed to the sun to dry.

Together with the bread, the dates and olives are present a little everywhere when traveling through Morocco, showing the importance of this products in the local diet.

But Tinghir itself maybe doesn’t have any touristic attraction but it’s a really nice place to chill and make a break in a Morrocan trip, enjoying the chill local rhythm, and observing the local lifestyle while sitting at a terrace in the main square drinking tea and eating the harcha, a traditional Moroccan flat bread made from semolina. Everyday, at the main square fills up with a market where it sells from dates to electrical equipment, clothes and plastic utensils, and where you can find advice from an astrologer who also sells natural remedies. Curiously it is a predominantly male area, while women mostly frequent the bazar nearby the Jewish Quarter.

Where to sleep in Tinghir:

Hike and Chill Hostel… located on the Jewish Quarter, about 5 minutes walking from the main square of Tinghir… if you don’t get lost!!! There’s a double room and also dorms, all sharing bathroom. The decoration is very cool and made with care and good taste, and the building was properly renewed, but respecting the traditional style. On the top, you have the traditional rooftop from where you have a great view for the oasis, and from where you can spend hours watching the shifting light as the sun slides the rocky walls of the Atlas Mountains.

A dorm bed costs 50 Dirham (you have the option of bunk beds or mattress on the floor), without breakfast. The breakfast is kind of continental style with a Moroccan touch and includes yogurt, jam, butter, fruit, local bread and sweets. In case that you want to shower outside the “normal” morning time you need to ask a bit in advance, and the water is heated with fire and it takes time…. but it comes super hot!!!

Avoid the booking websites and go directly to these guys that are cool super friendly and for sure that you can get a better deal!

Where to eat in Tinghir:

As Tinghir is very small it’s easy to check all the restaurants and eateries after a short walk. The local market, that part is in the street behind the mosque, and the other part is a concentration of small shops between the mosque and the main square. Here you find a bit of everything, from fruits and vegetables, to groceries and olives. There is also a good bakery but you can try the homemade bread that is sold in the street, usually by women; it’s not so easy to spot as they have the bread covered with cloths but these ladies are dress with a traditional outfit, that from far distance look like they are warped in a white sheet…. easy to spot!

In the main square as also in the streets around, you can easily find small eateries selling traditional flatbread, as harch and msemen, that are perfect with a tea or with the traditional besara or harira, to of the traditional soups, each one serve in specific times of the day… the food is cooked outside so just follow your intuition and trust your senses to find the best combination of these standards of Morrocan cuisine.

For a proper meal, like tagine, you can find several restaurants along Rue Hassan II, in front of a small park (Jardin Public).

How to go to Todra Gorge:

If you use the car or taxi, is nice to make a few stops along the way, to observe the oasis from the top of the cliff; it worth to see, of course, but you’ll miss the chance to feel the local lifestyle of the oasis and the interaction with the population.

How to go to move away from Tinghir:

There isn’t a propoer bus terminal in Tinghir. The long distance buses stop in the main road (Boulevard Mohamed V) not far from the small public garden.

The Supratours buses stop in Tinghir and you must buy the ticket in advance (I brought it in the same day without any problem) in a small shop on the back of the mosque, facing the local street market.

The bus from Tinghir to Merzouga departures at 4 p.m. and arrive around 9 p.m. It costs 90 Dirham, plus 5 DH for luggage.

Check the images below with the schedule to the different destinations.

Supratours contact: 0524832978 (the office only opens about one hours before the buses arrive or departure). 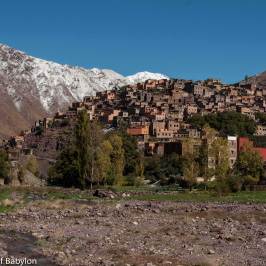 When we think about Morocco, cold and snow are not words that first pop up... 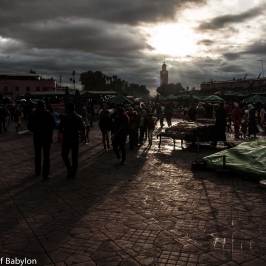 Arriving at a new country always demand certain adjustments… learning the greetings and the way... 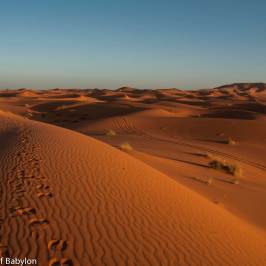 Merzouga is a small village, a kind “end of the road” before you reach the... 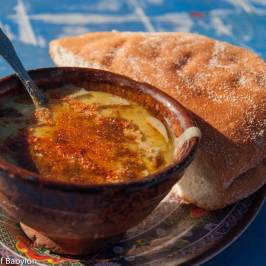 Morocco, by its Mediterranean traditions and by the Muslim culture has a meat orientated gastronomy... 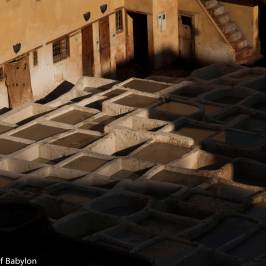 The medina, the old part of Fes city, is considered the biggest pedestrian... 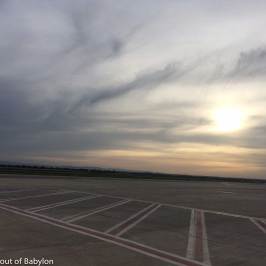