The Chennai International Airport is located about 20 km southwest from the center of the city. To avoid the extra cost of a taxi, and all the issues like bargain the price or get the chance to be cheated the train shows up as the best option if you are traveling with a small budget, particularly if you are alone and can’t share the taxi fare.

It’s not difficult but it takes a bit of time.

The closest train station is Tirusulam, located at a walking distance from the airport.

As you leave the arrivals passenger terminal you are facing a big car park. Just walk a bit to the right side, passing under a concrete viaduct (a highway), and keep walking straight until you see the entrance of the “pedestrian subway”. If you as the direction to the guards of the airport or to some taxi drivers they will show you the way, even if they don’t speak much English… just ask “railway station” or “train”.

Take this pedestrian subway and you’ll reach the station ticket counter, where you can buy the 10 rupees ticket. At the ticket counter is better to ask the number of the line… or try your change looking for “Chennai-Beach”.

There are 2 main trains station in Chennai: Central e Egmore. Central is the best located one, closer from Triplicane (a neighborhood with cheap guest houses) and is also where you can find the “Tourist Ticket Counter”, in case that you want to move on from Chennai by train. Unfortunately, the train that pass by Tirusulam (airport) goes doesn’t go to Chennai-Central but to Chennai-Egmore.

As you arrive at the platform, choose the side that goes to “Chennai-Beach”. There are signs, but you can also ask the people there. As it is a suburban train, you don’t need to wait for a long time, but also don’t expect to find a seat, as these trains as all unreserved. Anyway, the trip doesn’t take more than 20 minutes.

In case that Chennai is just a stopover in a bigger itinerary and you need to buy a train ticket, is better to go straight to Chennai-Central, where you can find the “Tourist Ticket Counter”. At Egmore, you can’t buy tickets for long distance trips.

From Egmore to Chennai-Central is better to take a tuk-tuk to overcome the 2 km full of traffic and noise that separate the two stations. A tuk-tuk will cost between 70 to 100 rupees.

At Chennai-Central you have the challenge to find the “Tourist Ticket Counter”. Facing the main old building you need to walk to the left side until you find a big white building, a kind of modern concrete construction. Inside the big lobby, there’s a staircase. The ticket counter is in the first floor. Just in case: there’s an ATM of State Bank of India at the entrance of this building.

Arriving at Chennai-Central, there are buses to Triplicane: 32, 32A that stop in front of the station. But watch out because you can take easily the bus in the wrong direction. Double-check the direction of the bus, with the driver or the ticket seller, before jump to the bus… I already get lost twice!

Where to sleep in Chennai:

I’m used to stay in Triplicane, a Muslim neighborhood with good connection by bus with the two train stations. In Triplicane there are some guesthouses and cheap hotel.

My favorite is Broad Lands, a classic from hippie times, located in a charming and decadent house that was at times the residence of a rich Muslim. 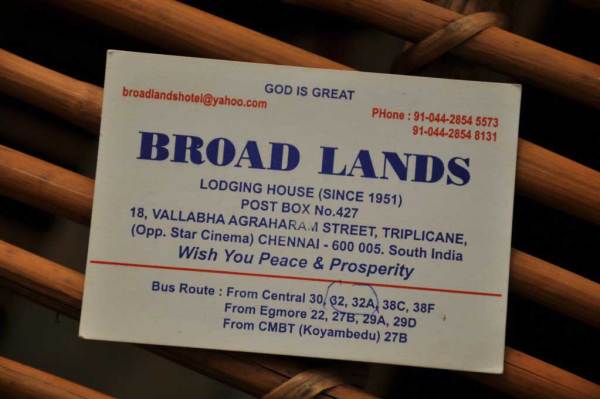 Where to eat in Chennai:

One of the reasons why I prefer to stay in Triplicane is not just because of the glamor of Broad Lands, but also for restaurants, where you can taste amazing food, flowing the traditional south India style. Predominantly vegetarian and yummy!!!

Along the main road of Tripicane, where the bus drops you and awalking distance from the Broad Lands, there are several options.

My choice goes Ratna Café, for south Indian snacks, but where you can also find thali during the day, more or less until 3 p.m. The prices are cheap, but if you prefer a bit more comfort, which means air-condition, there’s another room on the first floor, where is charged a bit more for the same food.

With also amazing food is Anandha Bhavan, located on the left side of the same road. The place is simple but with an atmosphere. Is very popular between locals and the thali (only vegetarian) is amazing… and you can repeat as many times as you want… just for 70 rupees.

The Triplicane main street is noisy and has a lots of traffic, so is not a place for a pleasant walk, so is better just ask about these restaurants to the local people, specially shop keeps, that everybody knows Ratna Café and Anandha Bhavan are a kind of institutions of this neighborhood as also from Chennai.

How to go from Chennai to New Delhi by train:

To travel by train from Chennai to Delhi I strongly recommend the train number 12269 (Hazrat Nizamuddin Duronto Express).

It’s a long journey of 28 hours but this train just makes a few stops, so there’s not many people come in and out all the time, and all the meals are included, breakfast, lunch, dinner, snacks, chai and even water and newspaper. The Duronto Express trains link the biggest Indian cities, and offer a better service; despite the ticket being a bit more expensive it definitively worth the comfort, especially for long journeys. The train is more modern and clean, and the toilets have maintenance during the trip.

It departure from Chennai-Central early morning and after spending one night on the train you arrive next day to Hazrat Nizamuddin, a few kilometers from New Delhi Train Station. Beddings are available on the train for 10 or 20 rupees!

The food is good. The chai is free.

One of the best train trip that I experience in India, even in Sleeper Class!

%d bloggers like this:
We use cookies to ensure that we give you the best experience on our website. If you continue to use this site we will assume that you are happy with it.Ok