I didn’t visit much of the Kyoto sightseeing during the four days that I spent there… maybe because it was the last stop od a 40 days trip in Japan, and felt that there will not be many surprises… maybe because I spent the previous nine days in nature, hiking in Koyasan and in Kumano Kodo made harder the transitions to the city lifestyle … or maybe because I found Kyoto crowded!!!

And in fact, most of the tourist attractions are overcrowded, with the streets that lead to the principal attractions being flooded with people and endless souvenirs shops.

But I must surrender to that fact that the Gion area, where the city climbs gently the hill ending at the majestic Buddhist temple Kiyomizu-dera, with its narrow streets flanked by wooden houses, the machiya, that preserve the simple and elegant traditional architecture of Kyoto townhouses.

Wandering along the city of Kyoto is possible to see many temples and shrines, sometimes discreetly hidden in busy commercial streets where most of the people pass by without even notice. These hidden places maybe don’t have the historical significance or an astonishing architecture that attracts crowds of visitors, but the quietness and the simplicity that you can find in small temples and shrines offer a peaceful atmosphere that you can’t find in the crowded temples.

In the same area, there are two other to check that don’t stand up in the architectural or historical importance but that is very popular among the Japanese visitors. The Yasaka Koshindo is a Buddhist temple that is being slowly absorbed by small colorful toys made in a colorful fabric that represents the Kukurizaru monkey with bound feet and hands that people hand all around the temple.

It’s common in Japanese Buddhist temples to buy small wooden plaques – ema – where people write their prayers or wishes and hang them in a specific place in the temple or shrine, to be taken by the kami, spirits or gods that according to the tradition are believed to receive them. At Yasaka Koshindo the ema is almost a phenomenon covering almost all the small shrine and spreading quickly to the main temple. The women play this ritual (I don’t know why there were just young women there) in great excitement, dressing rented kimonos, ending the tour to the temple with the usual selfie!!!

Not far from there, the Yasui Konpiragu, a small Shinto shrine has also something unique: a big granitic stone with a hole that according to the belief can erase the …memories from a past relationship and bring good luck to the start of a new one. For that, is necessary to crawl through the hole in both ways. Before is necessary a bit of ritual, sticking a paper with the prayer in the stone that is already totally covered with paper!

Part of the ritual of a Kyoto trip is to dress the traditional kimono that is possible to rent for a day in the endless number of shops that you find in the Gion area. It’s a popular thing not only for foreigners but also among Japanese tourists that visit Kyoto, to experience the Japanese tradition in the ancient capital.

Moving away from central Kyoto, the most popular destination is the Arashiyama area, where a few significant Buddhist temples and a packed bamboo groove attract thousands of people that come here on a day trip. The area has a lot to offer and the location near the river makes it a very crowded place, practically on the weekends.

I confess that didn’t really enjoy that much Arashiyama probably because of the crowds and the high concentration of selfie-sticks… or maybe because I’ve seen similar places like this before, but still there was something that made it worth the trip (about one hour by bus): the Otagi Nembutsu-ji, a Buddhist temple from the XII century. It really worths the walk up the hill to reach this place, where the high level of humidity creates the conditions for the growth of a think moss layer that covers stones and temples.

The ground around the Otagi Nembutsu-ji temple is fill up with stone-carved statues, about 1200. Pilgrims that come here to learn to carve under the guidance of Kocho Nishumura, an artist that becomes a monk, made these statues during the past century

All of these statues are different and represent rakan, Buddha followers, in different poses and facial expressions, from serious prayers to a hilarious laughing. Otagi Nembutsu-ji It’s not out of the beaten track but definitely is away from the big crowds that flood the Arashiyama area. On the way, there’s also the Saga Toriimoto, a street that preserves the traditional architecture and where you can stop in one of the teahouses to enjoy local Japanese sweets, most of them filled with bean paste.

Leaving behind the funny stone statues, you can reach another temple, the Adashino Nenbutsuji where the maples tree shows the different red tones of the autumn foliage that surround the cemetery. Adashino Nenbutsuji also has a bamboo grove, smaller but way less crowded than the Sagano Bamboo forest, nearby Arashiyama Station.

The Seiryo-ji, another Buddhist temple, where a gigantic prayer wheel richly decorated with paintings, which is rare to find, which goes unnoticed by most of the people who head straight for the grand hall.

But what really stand up in Kyoto was the Fushimi-Inari Taisha, a Shinto temple located about 2.5 km southeast from Kyoto station, dedicated to Inari, the Shinto god of rice and sake, that has foxes as messengers, which statues you can be seen everywhere guarding the entrance of shrines, as also in small images in the endless souvenirs shops along the street that links Fushimi-Inari Taisha with the closest stain station (Inari Station).

The temple itself if impressive by is size but what is really catchy are the 4 km maze of paths that go up and down through the forest that ends up in the summit Mount Inari, from where you can have a good view to Kyoto.

But Fushimi-Inari Taisha is famous for the photogenic torii, which are the iconographic image of this place. The torii is a kind of gate, made traditionally in wood, which is located at the entrance of Shinto sacred places and shrines, symbolically marking the transition between the mundane to the sacred.

Along the way that leads to Mount Inari there is more than 10.000 torii – yes, ten thousand!!!  – offered by several companies asking for success in business as Inari as the patron of business. In some parts of the trails, the concentration of torii is so high that it forms a kind of tunnel that a kind of warp the paths, filtering the light and creating a mysterious atmosphere. The intense and bright red color of the torii contrasts with the green of the forest that densely covers all the area, making the walk along the trails as a kind of symbolic initiatory experience where one can enter the world of the supernatural at any time. Cearings open in particular sacred locations, where stone-carved fox statues that look like they are protecting the place guard dozen of moss-covered small shrines.

The entrance is free, and despite the crowd that you’ll find at the entrance of the temple and along the first meters of the trails, most of the visitors don’t hike the 4 km that go up and down the Mount Inari.

Where to sleep in Kyoto:

TheGuest House Taiko-ya Bettei is a Kyoto’s traditional townhouses, machiya, with more than 180 year-old, build in wood, around a small garden. The location, despite being a bit far from the Kyoto Station (one metro stop) is a walking distance from the more popular areas like the Nisiki fish market, the Yanaka temple, Gion, etc… And without luggage is also a walking distance from the Kyoto station!!

It’s a quiet local neighborhood with supermarkets and restaurants close by.

The dorm is not so attractive as it is located in a new characterless building, but the rooms have tatamis and futon beds in the traditional Japanese style. In the winter it was a bit uncomfortable as to reach the toilets and shower you need to cross the garden but there’s something cozy in this house that made me enjoy the days that I spent there.

Where to eat in Kyoto:

Like any big city, Kyoto has a lot of options for all budgets and for all kinds of food. I stick to the traditional Japanese food, where the udon was the main choice, mainly because I like it a lot as also it’s a dish that can be found without meat or fish… although, the broth has probably some fish products!!!

Here’s the result of my gastronomic experience in Kyoto: 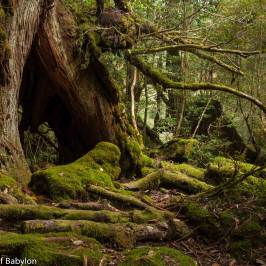 Looking for a magic place?!?! Japan has a lot of beautiful landscapes, but Yakushima Island... 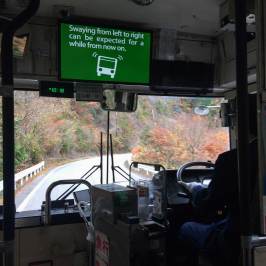 From Koyasan to Tanabe: Just to make it clear: Tanabe is the name of the... 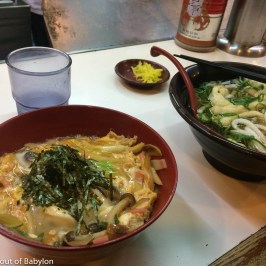 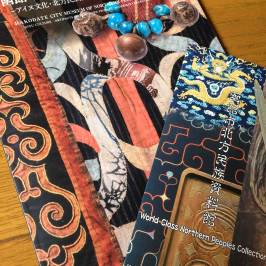 Hokkaido is also home to one of Japan’s small ethnic groups, the Ainu, descendants of... 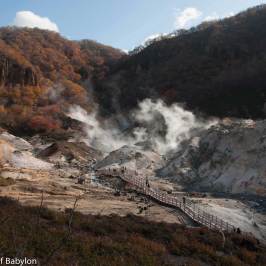 Noboribetsu was the first stop in Hokkaido prefecture and is famous for its sulphorous water... 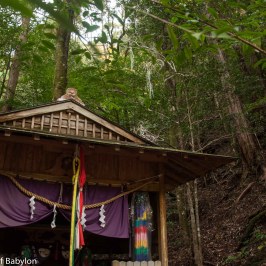 The Kumano Kodo is and ancient pilgrimage trails, with more than 1000 years, that link...